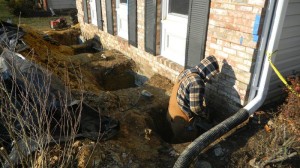 The 2013 year has proven to be very unpredictable when it comes to our weather.  From the late snow storm to the unseasonably cooler summer, the old mother nature seems to be having a hard time determining if Virginia should be extremely hot or extremely cold.  With temperatures in February being warmer than the temperatures that brought the snow storm one month later in March, your home’s foundation could be seeing additional cracks and damage this year.

The effect of weather change on foundations.

Have you ever had a chip in your car’s windshield that was just a small chip and then almost over night it expanded across your entire windshield?  Maybe it was a small crack that slowly expanded until it reached from one side of the windshield to the other side.  These events typically happen when the temperatures go from one extreme to the other.

As temperatures rise and fall, the concrete and cinder blocks used to build your home’s foundation expand and contract just like the glass in your car’s windshield.  The cracks in your windshield are always much easier to see than the ones plaguing your home’s foundation.  The extreme weather changes can cause minor cracks to become larger cracks if left alone similar to the cracks in your car’s windshield.

The effect of earthquakes on your foundation.

Looking back to 2012, the Fredericksburg region and much of the eastern United States began experiencing more frequent earthquakes bringing attention to fault lines located below the surrounding western counties to Fredericksburg, VA.  Louisa County suffered the most devastation during the first of many earthquakes to happen along the eastern states.  After that earthquake, after shocks continued for months causing movement in houses and foundations.  Virginia homes are not built to withstand massive earthquakes as the homes in California and the western states are.  Many home owners were not even aware of fault lines that lay below their homes.  These earthquakes and aftershocks caused numerous cracks and damage to the foundations of homes in Virginia along with other states including Maryland and North Carolina.

Pentrey Builders is a foundation specialist with the ability to repair your home’s foundation and prevent further damage.  Fixing even the smallest crack can keep your home from experiencing major damage at the cost of the changing weather systems.